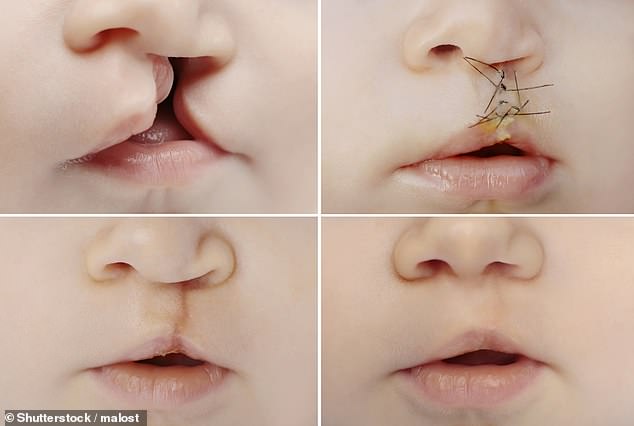 Cleft palates (pictured) affect around one in 700 babies in the UK and are usually repaired with surgeries during childhood – Colombian researchers say they may be able to fix the deformity in a single procedure using stem cells from the baby’s own umbilical cord (stock image)
Blood from the umbilical cord could be used to repair cleft palates in babies, scientists claim.
The new treatment – trialled on nine children in Colombia – could replace the need for bone grafts when children get older.
Cleft palates, in which the skull has a gap on the face where the nose and mouth join up, affect around one in every 700 babies.
Doctors now believe using stem cells taken from umbilical cord blood could reduce the number of operations affected babies need.
Researchers at the Hospital De San Jose in Bogota, Colombia, trialled the new surgery on nine children over the past 10 years.
They said the operation showed good results in attempts to grow a new bone from scratch, to repair clefts.
The authors wrote in the study: ‘The potential regenerative power of the stem cell encouraged [us] to find new methods to be added to the classical surgical techniques and make possible better results [for] cleft patients.’
In a case study of one girl, they said she showed ‘good thickness’ of her jaw bone when she was followed up at the age of five after having the operation.
The unnamed girl was diagnosed with the missing section of bone in an ultrasound scan while she was in the womb.
Bone was missing from her upper jaw, where teeth should grow from when she got older.
Immediately after her birth, blood was taken from the umbilical cord and frozen to be used later.
Scientists took that specific blood because it is a rich source of stem cells – human cells which have the potential to grow into bone or other tissue