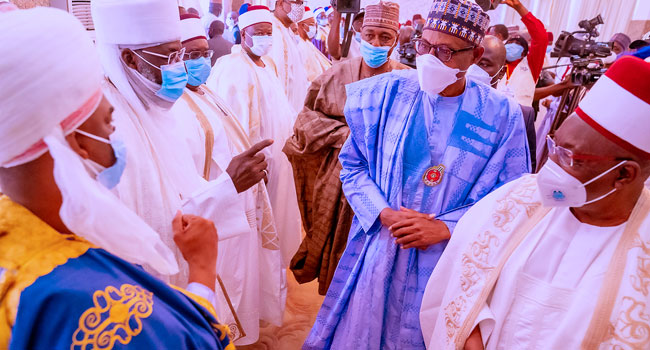 President Muhammadu Buhari on Thursday said his administration will keep giving its best for the development of the country until May 2023, reiterating that he will hand over as stipulated by the Constitution.

He spoke after the commissioning of Oriental Energies Resource Limited Hanger, Muhammadu Indimi Distance Learning Centre, and an International Conference Centre donated to the University of Maiduguri in Borno State.

“I know I swore by the Constitution, and I will leave in 17 months,” he was quoted as saying in a statement by his media adviser, Femi Adesina.

The President also commissioned the Tijjani Bolori Memorial Secondary School and the first fly-over in Borno State, Custom Roundabout (3.5km) with a stretch of 10km Gamboru Ngala Road constructed by the state government.

He asked Nigerians to appraise the performance of the administration based on what the situation was on security, economy, and corruption before he came in, and where it is now.

“We have a great country … and we thank God for giving us so much resources. But we need to develop our resources,” said President Buhari who noted that development would be more sustainable by empowering the people.

On security in the North West, he said it was sad that the people who lived together, sharing same culture and outlook for a long time would start stealing, kidnapping and killing one another.

The President, however, stated that the military would come down hard on the North West to stabilise the situation, having procured more hardware.

He also commended Borno State Governor, Professor Babagana Zulum, for the work he had done in two years, noting that he was in the state earlier in June to commission developmental projects.

In his remarks, Governor Zulum appreciated the President for honouring the state, adding that Indimi’s contributions to the development of the state showed he loved his people.

“Words cannot convey our gratitude for the statesmanship,“ he said.