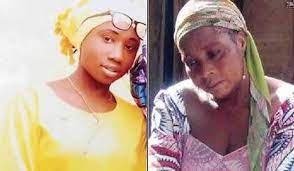 The parents of Leah Sharibu have said they are tired of begging the Buhari-led administration of facilitating the release of their daughter who was abducted by Boko Haram four years ago.

Leah Sharibu was one of the 110 female students of the Government Girls’ Science and Technical College, Dapchi, Yobe State, who were abducted on February 19, 2018, by Boko Haram terrorists.

Speaking in an interview with Punch, Nathan and Rebecca Sharibu said they were tired of speaking, crying, and pleading with a government that had remained deaf to every legitimate demand to free their daughter.

The parents who spoke through their spokesperson, Dr Gloria Puldu, said

“Thank you very much for your concern. Let me tell you how the family has agreed to spend this Christmas. They said they were tired of speaking, crying and pleading with the government of Buhari, which is deaf to every call.

So, it is agreed that they should remain silent and just call for continued prayers. They said they were tired of routine calls, which hurt so much that they had to just call on anyone who wished to stand with them to do so only in prayers.

We wish to respect the family’s wishes. We have only sent out Christmas greetings by calling for prayers.”