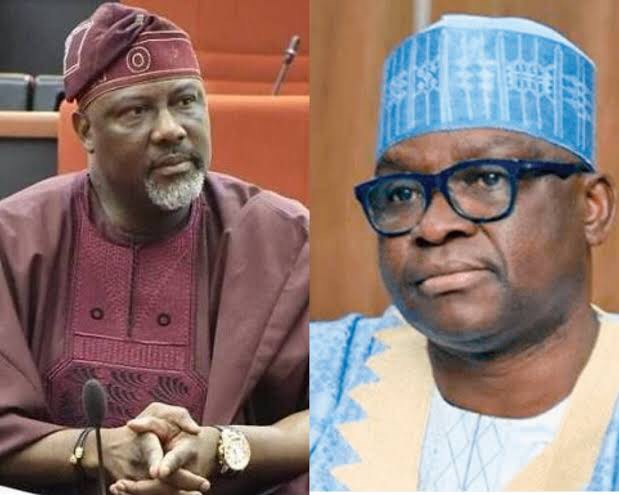 Former governor of Ekiti State, Chief Ayodele Fayose has denounced an ex-Senator, Dino Melaye as a political Hushpuppi who would take three different positions on the same night.

Fayose was reacting to a statement credited to the ex-Senator who represented Kogi West in the upper chamber of the National Assembly, when he said, “mauling of Amala gained more publicity over the collection of the presidential nomination form, in a pretentious exhibition of dining with the masses.”

Recall Fayose had said in an interview on Channels Tv, Politics Today, flaying the duo of Atiku Abubakar and Bukola Saraki for leaving the PDP before the 2015 election.

He said “Jonathan, despite his flaws, we had supported him and some of our leaders didn’t go to APC …if some of them (who left the party) had become Presidents in Abuja would they come back? Will Atiku come back? Would Bukola Saraki have come back?

“When the journey was rough and bad, they ran back. Today, because our party is a party that tries to bring people together, we must not forget history.“Today, I’m glad they are challenging people jumping from one party to the other, those are the ideologies that are missing,” he added.

Dino Melaye was reacting to the interview and Fayose obtaining the PDP’s presidential nomination forms, had said in an interview that has now gone viral that “Nigeria is in dire straits at the moment. It is beyond the call of jesters in the corridors of elevated governance.”

“Inebriated by several wraps of Amala in Abuja, former Governor of Ekiti State, Ayodele Fayose, in his characteristic exuberance, directed indecent and indecorous attacks at two serious contenders for the presidential ticket of the PDP, His Excellency Atiku Abubakar and His Excellency Bukola Saraki.

“Incidentally, the mauling of Amala gained more publicity over the collection of the presidential nomination form, in a pretentious exhibition of dining with the masses.

“The issue before Nigerians now is not who can eat more, but who can produce food. That is why the attempt to tar the outstanding achievements of Atiku Abubakar as former Vice President and Bukola Saraki as former Senate President Fayose would be discounted as the belching perfidy of a presidential gambler.

“It is clear from the verbal missiles deployed by Fayose that he was simply de-marketing frontline aspirants in PDP as a counter-intuitive strategy to shore up the chances of his political godfather in APC.

“It is amazing that Fayose who could not manage and retain a PDP state now aspires to lead a behemoth structure like Nigeria. Today, Ekiti is stripped of all vestiges of PDP; no PDP Senator, no PDP House of Representatives member, no House of Assembly member, no Local Government Chairman, and not even a Councillor. He left Ekiti State worse than he met it. How could he fail in the state and expect promotion to the national?

Fayose, however, vowed to restrain himself pending when those he said Melaye was representing would enter the fray.

But his spokesman, Lere Olayinka said: “No time to dignify any #Hushpuppi politician who is capable of sleeping on three different political beds in one night.”

“If the man he is deceiving with his fake support speaks, we will respond accordingly.”

“As for Fayose, Nigeria and its people must be rescued from this APC Calamity that political jester of Kogi teamed up with others to enthrone.”

“That is a project to which he (Fayose) is totally committed, not rantings of a jester in the palace of politics.”