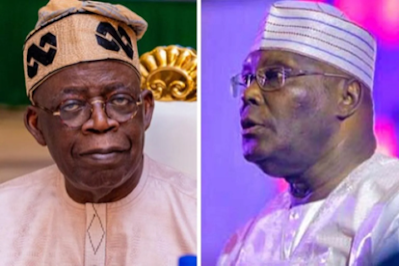 Atiku Abubakar, the presidential candidate for the Peoples Democratic Party (PDP), claimed that Bola Tinubu, the candidate for the All Progressives Congress (APC), lacks the moral character to reform Yahoo Boys.

In response to Tinubu’s claim that, if elected president, he will turn Yahoo Boys into IT gurus, Atiku stated his APC rival requires medical attention.

If Tinubu wins the presidential election in February, he has promised to establish a technology centre for the Yahoo guys.
The APC candidate pledged to establish technological and industrial hubs that would turn young people into tools for progress.During a campaign event in Benin City, Edo State, he made this announcement.

In response to his statement, Atiku claimed that Tinubu, given his history,didn’t have the foundation to rehabilitate Yahoo Boys.

Speaking via Phrank Shaibu, Atiku stated that Tinubu should first discuss his past before attempting to reform Yahoo Boys. Phrank Shaibu is Atiku’s Special Assistant on Public Communication.

Part of Shaibu’s statement reads: “Bola Tinubu, delivered another comic skit at the APC Presidential rally in Benin City on Thursday when he pledged to transform the “so-called Yahoo boys” in Edo State into “experts in manufacturing and manufacture of chips that din dasan dadauga.

We could have believed that he was speaking in tongues if he had been addressing a Christian church, but this was a campaign event where he was intended to sell his candidacy to the millions of young people suffering from unemployment due to the disease known as the APC.