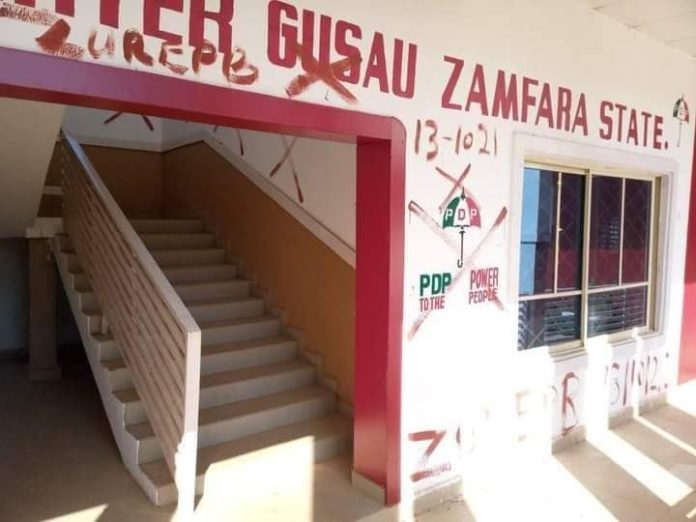 The Peoples Democratic Party, PDP, says it had instituted a suit challenging Zamfara Urban Regional and Planning Board, ZUREP, for marking the party’s state secretariat in Gusau for demolition.

Bala Mande, the state Caretaker Chairman, stated this while addressing newsmen shortly after the party’s executive meeting at the secretariat on Wednesday.

Mr. Mande, a former Chief of Staff to Gov. Bello Matawalle had remained in the PDP after the governor formally defected to the All Progressives Congress, APC, on June 27.

According to him, marking the party secretariat for demolishing was mischievous and an attempt to harass and intimidate the party members and officials.

“The PDP members are law-abiding citizens and we have approached a competent court to seek redress over the matter.”

Mr. Mande, who is a retired colonel, urged supporters of the PDP to remain law-abiding and refrain from taking the law into their hands.

The News Agency of Nigeria reports that in the suit filed before Zamfara High Court sitting in Gusau, the PDP is among others seeking the court set aside the October 29 notice of demolition given by ZUREP and declare it as illegal.

It also prayed the court to compel the defendant to pay the party the sum of N60 million as damages.